Cycling from London to Paris is a bucket list adventure for many avid cyclists.

And, it's very doable - so long as you're motivated, committed, and most importantly prepared.

However, this ride does need a certain skill level due to its length, so make sure to train up beforehand by exploring our London based cycle routes.

If you are an experienced cyclist, the best way to prepare for such a challenging route is to know it like the back of your hand.

That's why we've mapped out the three day ride in such detail. We've got you covered from the English countryside, to the ferry crossings, through historic towns, to the French capital!

Spend some time studying this guide. So, when you embark on your journey, you'll be able to keep up morale by knowing where you're heading at all times.

We've broken our London to Paris cycle route into four legs, which we run through in detail.

All you have to do is actually cycle it... easy, right? 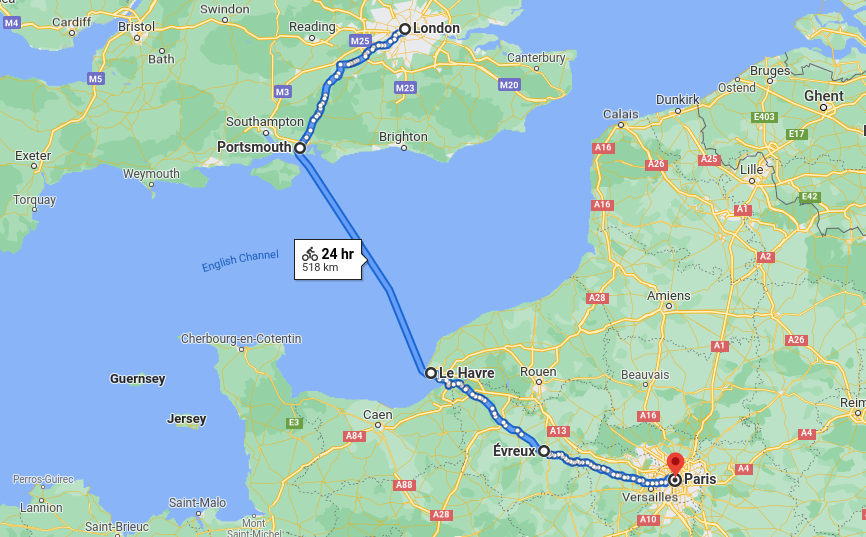 The Route (In Short) 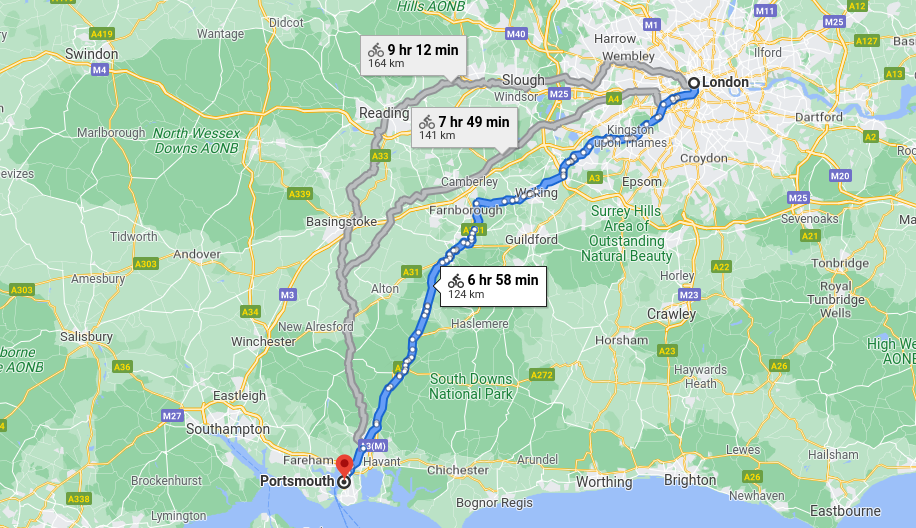 Our ride begins in the absolute centre of London - Trafalgar Square.

Getting out of London will be the slowest part of your journey. There are regulations on how fast you can cycle along most cycle paths in the city, so read up first.

To start, you'll follow the Thames west until you get to Putney bridge. Here, you'll cross the river and continue southwest, travelling by Richmond Park and Bushy Park as you head out of London. If you're interested in cycle routes that explore Richmond and Bushy park properly, check out our blog on the best South West London cycle routes.

After you've passed Hampton Court Palace and waved at the ghost of Henry VIII, you'll pick up the River Thames once again. Follow the river up until Weybridge, where you'll finally diverge from it and say goodbye to London.

From Weybridge, head to Woking. Here, you can stop for a spot of lunch and perhaps a visit to the Lightbox, a gallery renowned for spotlighting art and history. Once you've recharged, travel to Farnborough, from where it's almost a straight line down to Portsmouth.

Just keep an eye out for signage for key towns to make sure you're staying on track. The most notable of these are Farnham, Bordon, Petersfield, and Waterlooville.

From Waterlooville, it's only 2 miles of road to where you'll begin the second leg of the journey - Portsmouth. 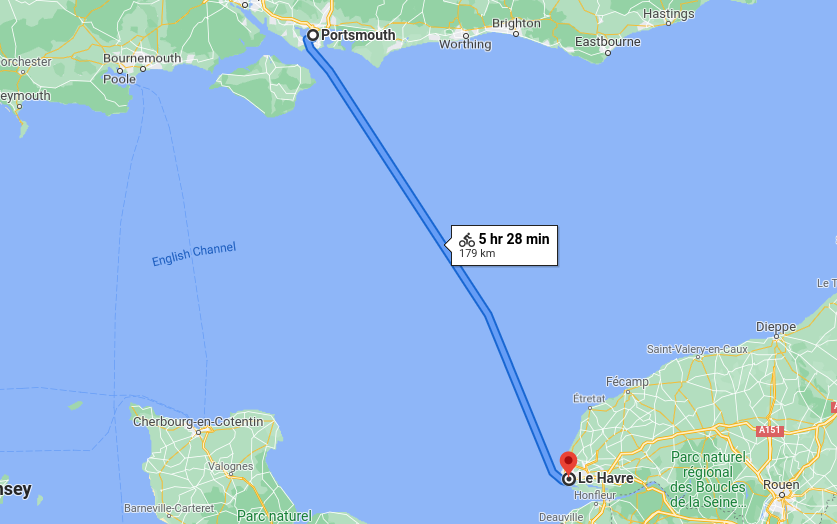 This is by far the easiest leg for you! Take the time to rest, relax, and ready yourself for the challenge ahead.

This ferry sails overnight, which is ideal for saving precious daylight hours. It means that you can keep moving in the right direction even when you're resting.

Plus, you'll save money on accommodation.

At the end of day 1, hop on the ferry and wake up on day 2 in France. It's that simple! 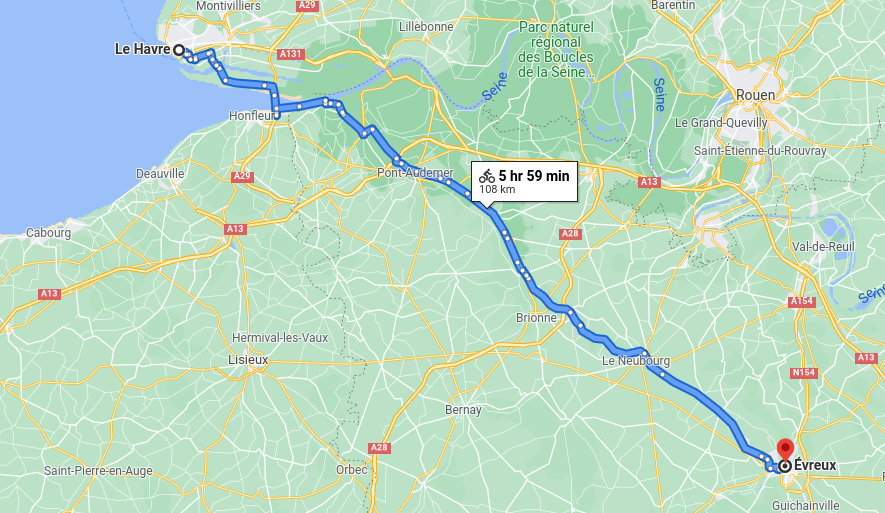 Disembark the ferry to the port city of Le Havre. The harbour was first created in 1517 by King Francois I and has been a working port ever since.

It's a vibrant city, often overlooked by tourists who instead swarm to Paris.

Another time, we'd recommend checking out the Museum of Modern Art or beaches, but you're on a mission! Thankfully, one of the most iconic sights in Le Havre is the city's contemporary architecture, which you can't miss when cycling through.

Our route also allows you to enjoy the French coastline until you cross the Pont de Normandie. Afterwards, you'll follow the Seine until it splits into the Risle.

Continue to follow the Risle River all the way to the picturesque village of Le Bec-Hellouin. It often ranks in the most beautiful villages in France.

It's a great place to take in the French countryside and timbered houses while you stop for a bite to eat. From there, it's a pretty straightforward cycle to Château du Champ de Bataille. The château dates back to the Ancien Régime, so understandably fell into decay after the revolution.

But, since then Jacques Garcia has pumped life back into the building and grounds, making it the majestic tourist spot it is today.

After the Château du Champ de Bataille, it's only an hour and a half cycle ride along quiet country lanes to Évreux. In Évreux there are many sights to see!

The most notable of these is the Évreux cathedral, one of the largest cathedrals in France. Its beautiful architecture towers over the commune - particularly helpful when you need to orient yourself. You'll spend your second and final night on your journey to Paris in Évreux. 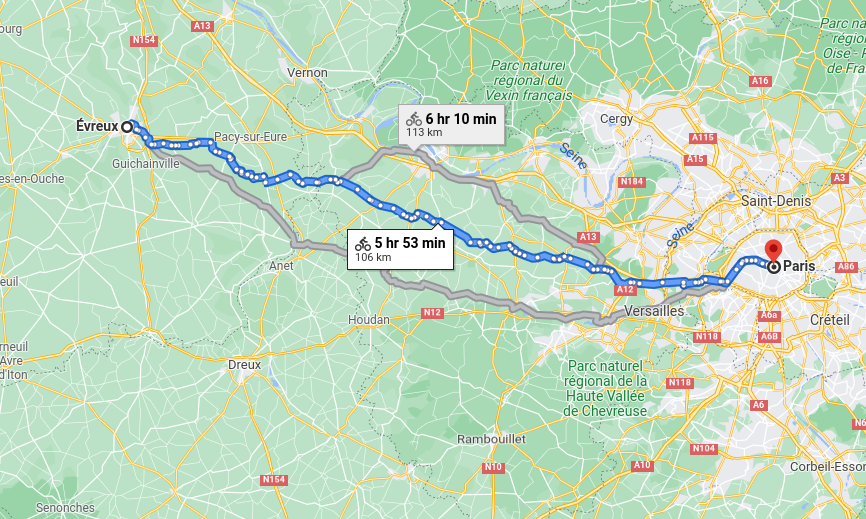 You'll want to wake up bright and early in Évreux so that you'll arrive in Paris in time to enjoy the afternoon.

For this leg, we want to offer you a choice. You can take the fastest route into Paris. This involves continuing to travel through beautiful countryside and quaint towns.

Or, you can take another popular route that passes Versailles. This extends your travel time by 20 mins (plus however long you spend exploring the grounds of the palace).

Based on history alone, we'd highly recommend taking the long way around. So, this is the route we're going to detail for you.

When leaving Évreux, head towards the commune of Breuilpont. Once you reach it, you'll be travelling directly South East for around 3 hours. This gives you a chance to stop thinking about navigation and take in the incredible french scenery.

You'll need to focus once again on directions when you reach Montigny-le-Bretonneux. But don't worry - you're almost at Versaille, so it's heavily signposted!

Just follow the roadsigns to the Palace of Versailles, where many French King's and Queen's resided until the 1789 revolution.

The site remained important throughout the revolution. It was where the women's march against the conditions of the people of France culminated. This is when Marie Antoinette is infamously rumoured to have said 'let them eat cake!'

Even if you're not interested in the history of France, you'll be impressed by the grandeur of the building and gardens. It's an ideal location for a last-minute break before the final push into Paris. Channel your inner royal and parade the gardens, enjoying the perfectly mowed lawns and trimmed shrubbery as you go.

From Versaille, it's a hop, skip, and a jump to Paris. Well, when we say that we mean an hour cycle - but, if all those women in the 16th century could march it, you can cycle it!

You'll pass through a national forest, over the Seine, and past the Eiffel Tower as you approach your destination.

Once you're in the city, follow the river to the centre. Be sure to keep an eye out for iconic landmarks, like the Lourve and Sainte-Chapelle, on your way.

We conclude this ride in the heart of the capital city - the courtyard of the Hôtel de Ville. From here, you're free to explore the city as you wish. Paris is a great city to enjoy by bike.

But, equally, if you're all cycled-out, you can visit the Arc de Triomphe and Montmarte on foot or by the cities metro.

Either way, you've done it!

Cycling for three days back to back is a feat deserving of a fun-filled break in Paris. Put your feet up and enjoy it.

Cycling From London to Paris

Choosing the cycle from London to Paris is a big commitment. It requires a level of fitness that only very experienced cyclists have.

But, deciding to take on this mammoth bike ride is extremely rewarding. You will undoubtedly look back at this bike route as one of your proudest achievements in life.

So, gather your fellow cyclist friends and family to take on the London to Paris bike ride:

If London to Paris is just the beginning for you, check out our Ultimate Guide to London cycle routes for even more bike ride inspiration.