South West London spills over into some of the UK's best beauty spots.

And if you're up for the ride, they're only a cycle away!

When you think of cycling in London, you might conjure images of a concrete jungle where you spend most of your bike rides stuck in congestion.

But, this couldn't be further from the truth in the South West of the capital.

In a relatively short space of time, you can cycle from urban centres to areas of natural wonder.

We've considered the many cycle routes within South West London and (after much deliberation) narrowed the list down to the five very best! 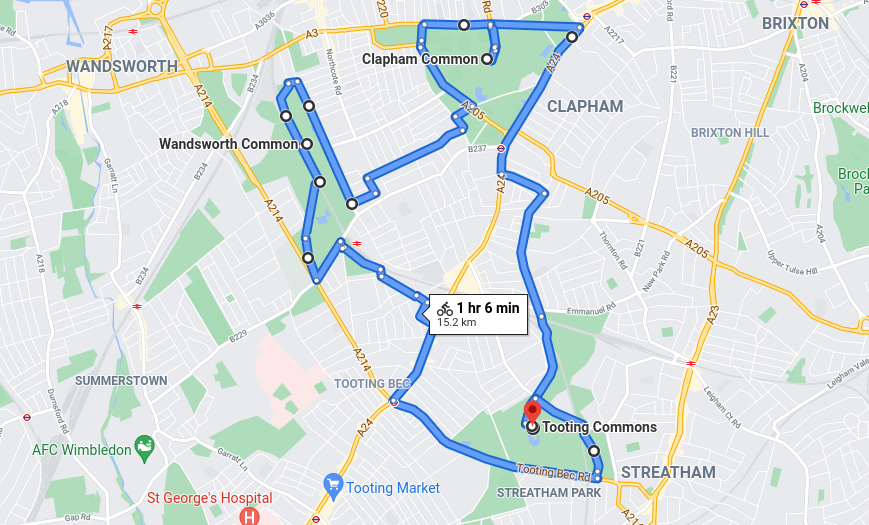 South London is full of areas that'd widely be considered parks but go by 'Commons'.

And the main thing that distinguishes a common is its history.

There's a misconception that they were previously lands that we're unowned and therefore anyone could enjoy them. The truth is that the grounds were owned by local lords. But, the principle was the same - anyone could enjoy the privilege of using the land.

The history around commons is a rocky one, but thankfully they remain public today.

So what better way to enjoy them than on your bike? Our ride is a circular route, beginning and ending at Tooting Commons.

Within it, you'll also get to visit Clapham Common and Wandsworth Common.

Make sure to visit the Grade II listed bandstand at Clapham Common. Try to time it with one of the many public concerts it holds for a magical experience. 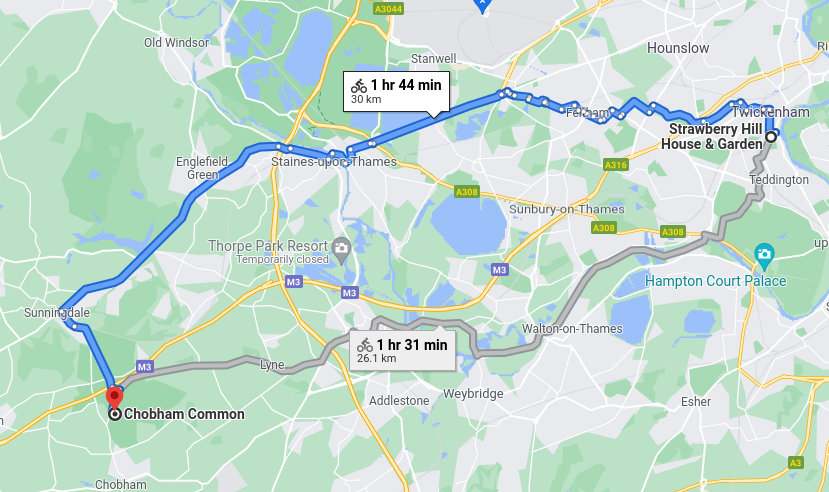 Begin this lengthy cycle at Strawberry Hill House and Garden.

Its Georgian Gothic revival architecture means it looks more like a castle than a house!

And, when you're finished gawping at the 'houses' size - there are expansive gardens to explore.

All this, and we haven't even set off on our journey yet!

From Strawberry Hill, the route takes you out of London and into Surrey. You'll know when you hit the counties border as the scenery becomes, abruptly, almost entirely green!

This ride terminates at Chobham Common, a national nature reserve.

The lowland heath is teeming with wildlife. Keep a lookout for unusual shrubbery and local animals as you cycle through. With 100 different bird species recorded in the vicinity and 29 butterfly species, you won't be disappointed.

From there you can head to the train station to get back to Strawberry Hill or, if you're feeling super ambitious, cycle home! 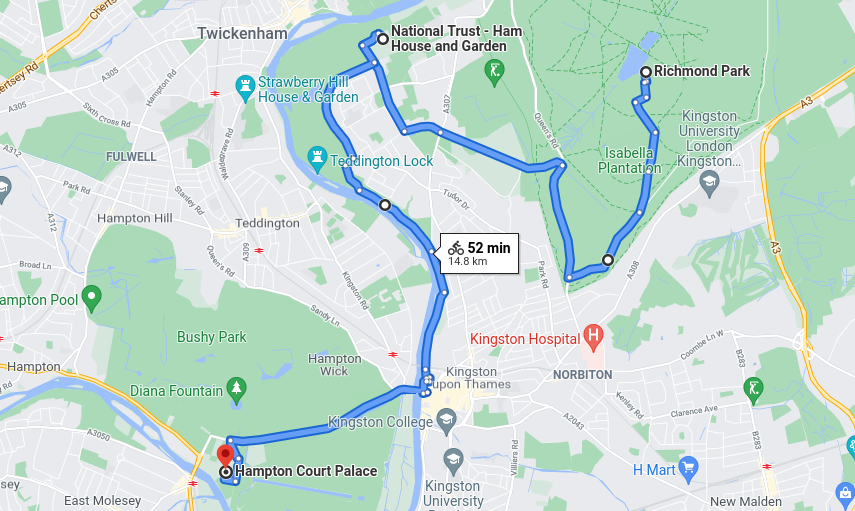 Beginning in one beloved royal park and ending at another, this route takes in some of the best green spaces South West London offers.

You'll begin the ride by making a Richmond Park loop, following part of the Tamsin Trail.

The cycle will take you through ancient woodlands, grasses filled with wildflowers, and deer herds.

And, that's all just within Richmond Park! Once you've explored Richmond Park to your heart's content, the ride takes you slightly North to Ham House and Garden.

This Stuart house is a National Trust Property. With a rich history to match its extravagant decor, it's a truly underrated experience in London.

And, it's home to gorgeous gardens for cycling through.

Then, follow the River Thames South to Kingston, travelling down quiet roads and into Bushy Park.

Bushy Park, like Richmond Park, is host to herds of deer. The part of the bike ride through Bushy Park and Hampton Court is flat and scenic.

So, it's perfect for a sightseeing tour if you're a group of mixed ability cyclists.

And, why not pop a picnic in your bike basket? Give yourself the royal treatment with an afternoon of relaxation at Hampton Court Park. 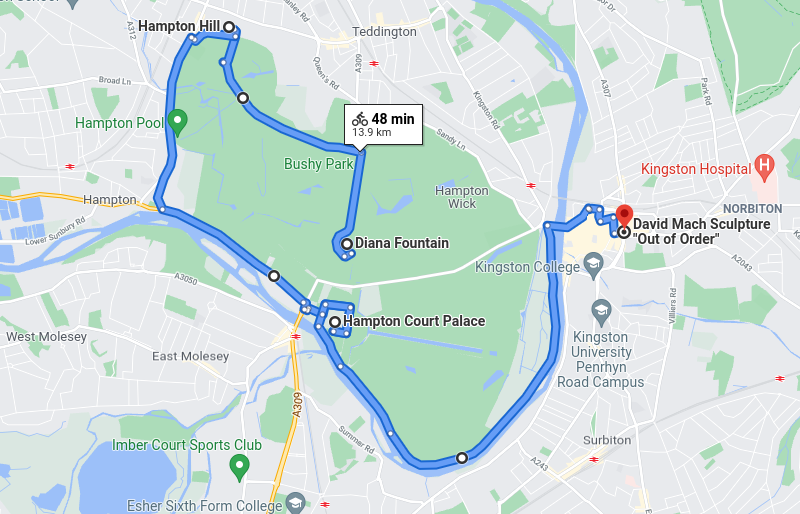 If you wanted to see even more of Bushy Park after the last ride, we've got the route for you!

You can attach it to the end of the Richmond to Bushy Park ride, or it can be treated as a ride of its own.

Either way, it's a great path to explore one of London's most famous parks. This route begins at the Diana Fountain. First designed in 1637, the fountain was created by Hubert Le Sueur, whose invoice for his work was £200!

This is unbelievable by today's standards for the intricate design and timelessness of the water feature.

Then, cycle to Hampton Hill. You'll be able to spot deer and the water gardens area of the park.

From there, circle down to the Thames River via Hampton Court Palace, and then follow the river to Kingston. In Kingston, you can stop for a pub lunch before visiting the iconic tumbling phone boxes sculpture 'Out of Order' by David Mach.

A great piece of modern art to contrast the 15th-century art you began the cycle viewing. 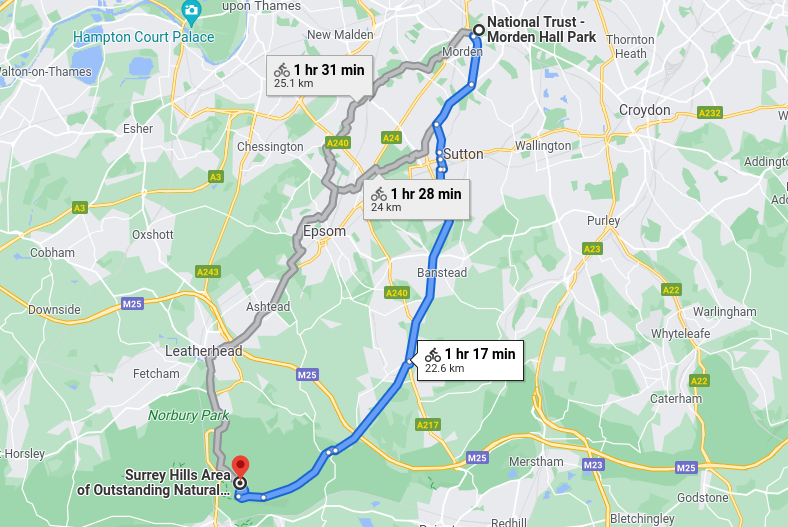 Cycling around Morden Hall Park is ideal if you're joined by little cyclists.

The site is home to open spaces, traffic-free paths, and natural play areas for many hours of family fun.

But, if you're an experienced cyclist, you can take it a few steps further - cycling to Surrey. This is a challenging cycling route, but worth it in the end!

Head out of London along quiet lanes, watching the landscape become more and more pastoral.

Continue until you arrive at Surrey Hills - the ultimate beauty spot accessible from South West London. There are countless spaces to visit in the Hills, each one more spectacular than the last. How about the Inglis Memorial? Or the Leith Hill Tower?

Or, make a day out of it and visit the quaint market towns surrounding the Surrey Hills!

Discover these stunning sights by bike. The cycle lanes are well mapped, as this is a favourite location for many cyclists.

So, it's easy to navigate, allowing for all your focus to be on the breathtaking views.

There are so many sights best seen by bike in South West London, it's hard to restrict our list to only five routes.

But, when asked our favourite routes in the area, they are without a doubt:

If you want to learn about even more impressive cycles, check out our list of The 6 Best West London Cycle Routes.