West London is home to some of the cities finest parks, paths, and trails for cycling.

You can treat these spots as the perfect places to get some exercise, breathe in some fresh air, and show your Bobbin Bike off in front of a worthy backdrop.

We've done the hard work for you.

We've scoured high and low through the many cycle routes in and around London to find the six very best in the West. All you need to do is give them a spin!

Whether you're a cycling expert or it's your first time on a bike in years, you'll be impressed by the amount of beauty you can see in one trip around West London - if you just hop on your bike. 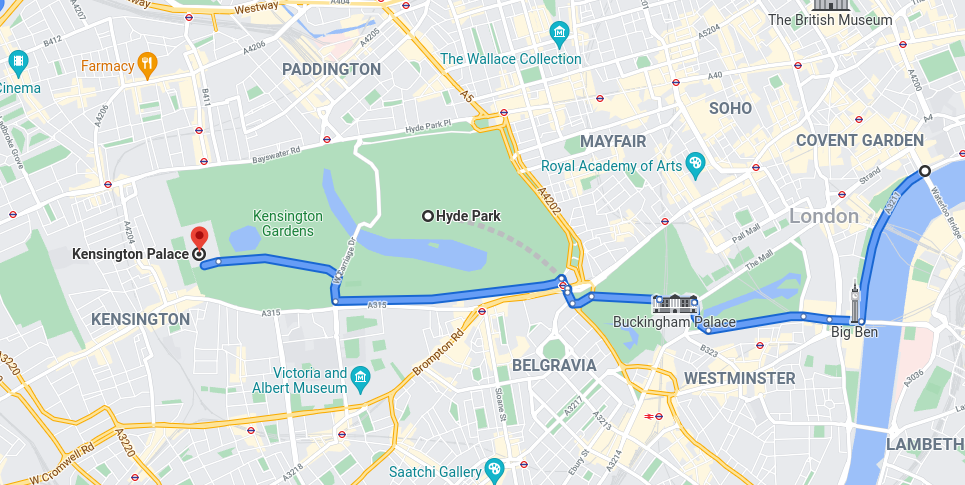 Our first route is one of a royal scale. Taking in two palaces, you're sure to bump into at least one member of the royal family - right?

The cycle begins at the Victoria Embankment in Central London.

This may be a town hub, but it luckily isn't impossible to cycle through because of the cycle path that runs alongside the main embankment.

At Big Ben, take a right towards Buckingham Palace. If you're feeling especially fancy, take a detour for afternoon tea at The Ritz. Then rejoin the route at the entrance to Hyde Park.

Hyde Park is one of the most cycle-friendly royal parks in London, with many of its path's welcoming cyclists.

Take in the one beautiful park before crossing a path and entering the next, Kensington Gardens. Once there, take your time enjoying the gardens as you approach Kensington Palace.

The palace was the birthplace of Queen Victoria and has been home to young royals for over 300 years. And, you can see why.

So, understandably, it's a beautiful location to explore by bike! 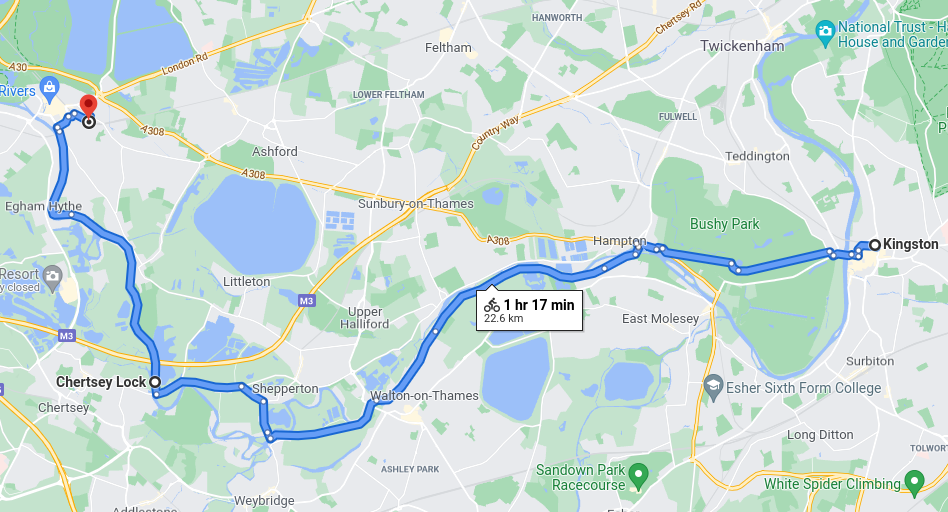 So, you can take the train home rather than follow the same path back.

From Kingston, follow the signposts to Hampton Court Palace until you come across the riverside path that you'll follow the rest of the ride. At Chertsey Lock, you have an option. You can either go around the lock (following Walton Lane) or take the Shepperton Ferry across the Lock.

We'd recommend the ferry; it's a great way to take in panoramic views of the city - without having to concentrate on keeping your bike balanced!

Once you've crossed the Lock, it's a short and scenic ride into Staines-upon-Thames.

There, you can stop for a pub lunch before hopping on a train home. 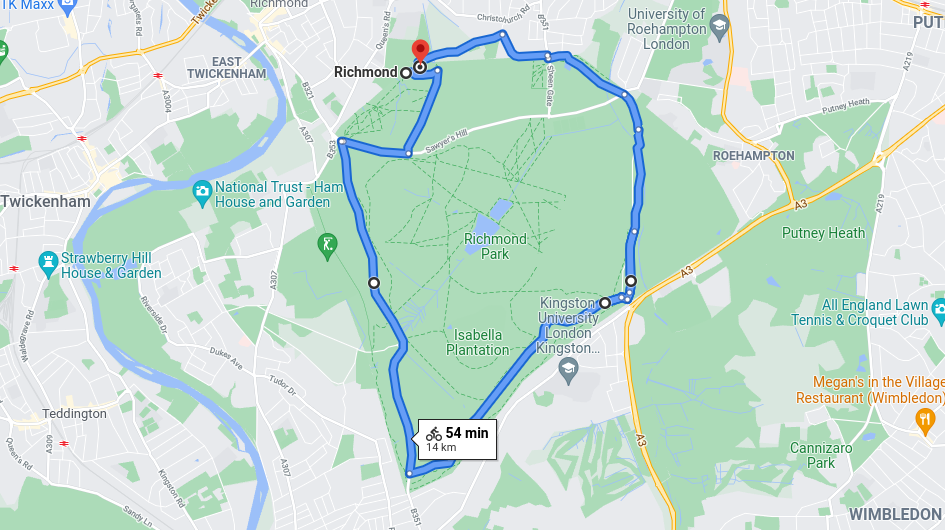 The Tamsin Trail follows the perimeter of Richmond Park.

You can begin at any of the gates and complete the loop to suit yourself.

It's a shared path between cyclists and runners, so you're required to ride your bike at a leisurely pace (not exceeding 20 mph) for the safety of those around you. It's also a good idea to get friendly with your bike bell - so pedestrians know you're coming!

The route may be simple, but it does involve climbing some pretty steep hills—namely, Dark Hill, Broomfield Hill, and Sawyer's Hill.

So, it would be best if you had a good level of fitness to cycle the trail. If you can handle the hills, the views are a worthy reward.

Our favourite is from the top of King Henry's Mound. The skyline extends all the way to St Paul's Cathedral in Central London! 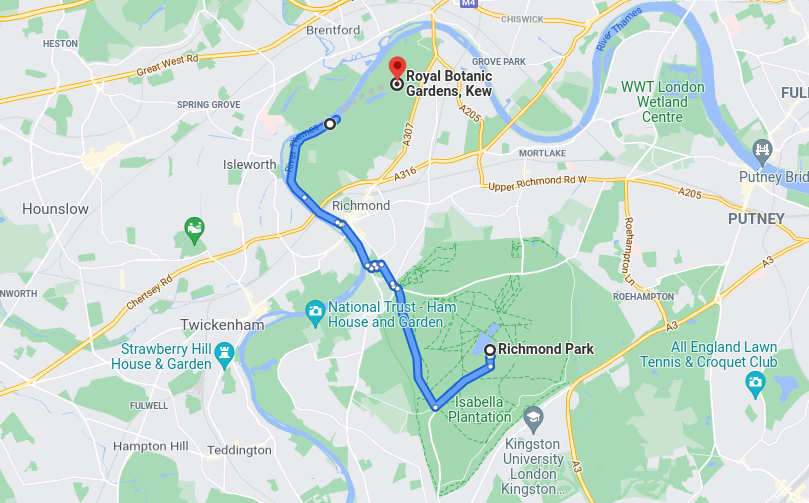 If you wanted to extend your bike ride after completing the Tamsin Trail, you could continue by picking up this route at the end of the trail.

Or, it can be a short and sweet ride of its own!

Beginning in Richmond park, join the Tamsin Trail at Sawyers Hill, up to Richmond Hill and towards Kew Gardens. We know, it sounds like a lot of hills.

But it's a relatively short ride, so we're sure you can overcome them.

Be sure to pre-book your entrance to Kew Garden's to avoid disappointment. As the Royal Botanical Garden, it's incredibly popular.

And, for a good reason. The Garden is home to an arboretum, a Japanese Garden, treetop walks, and so much more attractions to see.

So, you can easily spend hours after your cycle getting lost in the different spaces within. 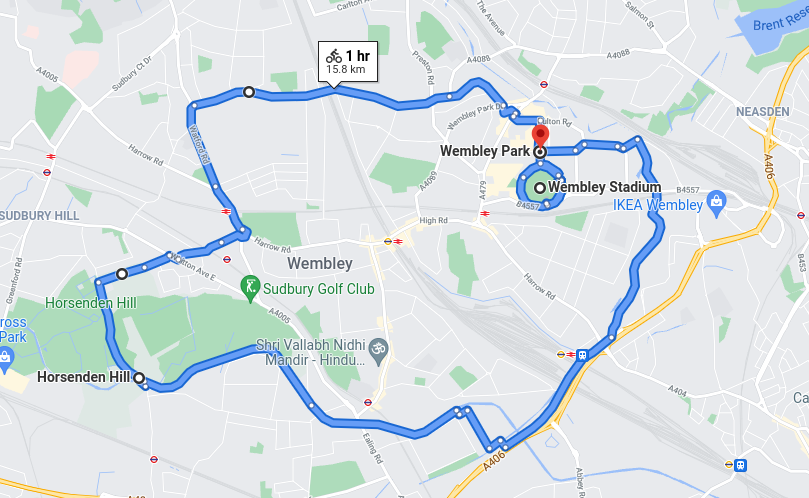 Wembley Stadium is an icon of British Culture.

Home of the England football team and venue for some of the worlds biggest musicians, it's somewhere many people dream of visiting.

And why not do it by bike? A loop of the town will get you anticipating the Stadium even more than you already are.

Take in the spirit of the area and how much the locals pride themselves on their home Stadium. 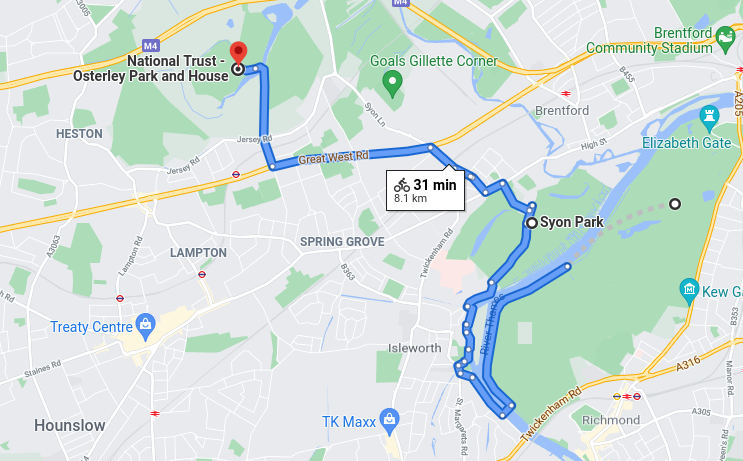 Starting at Kew Gardens, follow the outskirts of the gardens beside the Thames to Syon Park.

Syon Park is home to the beautiful Syon House, overlooked next to Kew Garden's but well worth a visit.

You can't cycle in Syon Park, so either push your bike through or cycle the outer perimeter.

When you've appreciated one grand house, move on to the next.

Osterley Park and House is a National Trust property that encourages cycling. Because of its emphasis on being cycling-friendly, it's the perfect place for a family bike ride. Your little ones can roam freely and safely.

With a variety of different trails designed for cycling, it's ideal for exploring again and again.

We hope we've given you some inspiration for your next bike ride in West London.

You don't have to travel far to find six rewarding cycling routes:

Ready to ride but missing the bike? Shop the Bobbin Bikes range today!