London is a city that's full of cycle paths, lanes, and routes.

And, south of the river is home to some of the most vibrant areas and iconic sights that the city offers.

So, exploring the south of London on your bike is a great way to see as much of it as possible!

Whether you're a tourist cramming the most you can into one weekend, or you're a local, born and raised in the capital grab your Bobbin Bike because we've got a cycle route for you.

Here are our top six bike rides in South London! 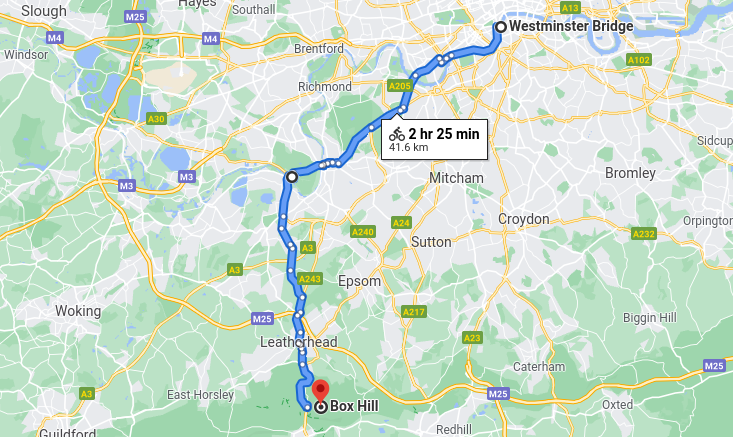 Taking you from one of the centremost points of London all the way into the Surrey Hills, this route covers some serious ground.

The most brilliant part of this route is the slow transformation from a built-up cityscape into smaller residential suburbs and eventually into pure nature.

By beginning at Westminster Bridge, you'll get this transition in its entirety as you travel to Hampton Court Palace and from there directly south until you reach Box Hill. Box Hill is the perfect London detox. The fresh air is a welcome change from the city's air pollution.

Just remember to bring a water bottle with you - this ride is thirsty work!

It's famous amongst cyclists as a bucket list cycle spot and you can see why. Every way you turn has spectacular views that seem far removed from London life. At the bottom of the hill is the iconic stepping stone paths over the river Mole to get a picture with (as proof you made the pilgrimage).

After your long cycle, reward yourself at the nearby Denbies wine estate or Surrey Hills brewery, depending on your tastes. 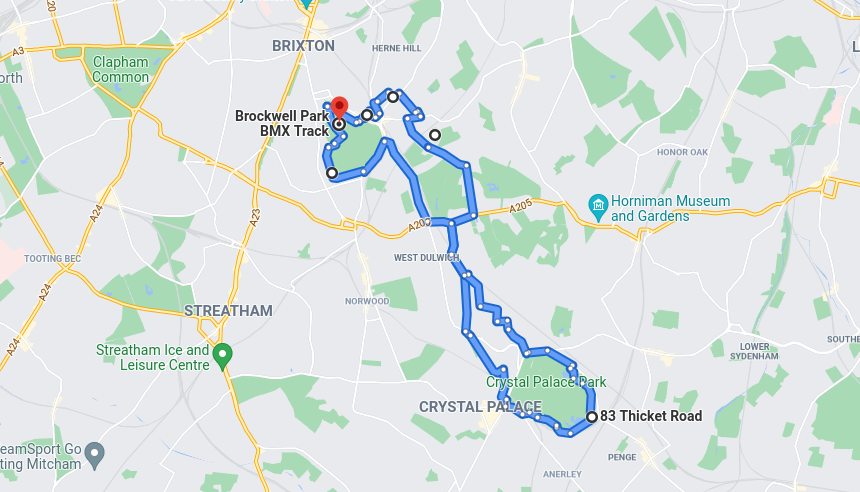 What's a better way to see the iconic cycling spots of South London than on a bike?

The ride begins at the cycle circuit at Crystal Palace.

Crystal Palace has a great cycling history since it became London's first home of cycle racing in 1869.

Since then, it has consistently hosted cycling events - making it the perfect start to the tour. Then, you'll cycle to Herne Hill outdoor Velodrome, where you can try your hand at a new style of cycling.

The velodrome puts on a variety of sessions for different abilities and age groups - so you're sure to find one you can do.

After that, you'll continue your bike ride to the Brockwell Park BMX track. Here is your opportunity to channel your inner daredevil.

Once you've been briefed on the safety procedures and have put on the correct equipment, you'll be flying over the bumps, racing around corners, and perfecting all the tricks in no time.

This route is a great way to have a whole day out from a relatively short bike ride. Stopping to enjoy the road as you ride it! 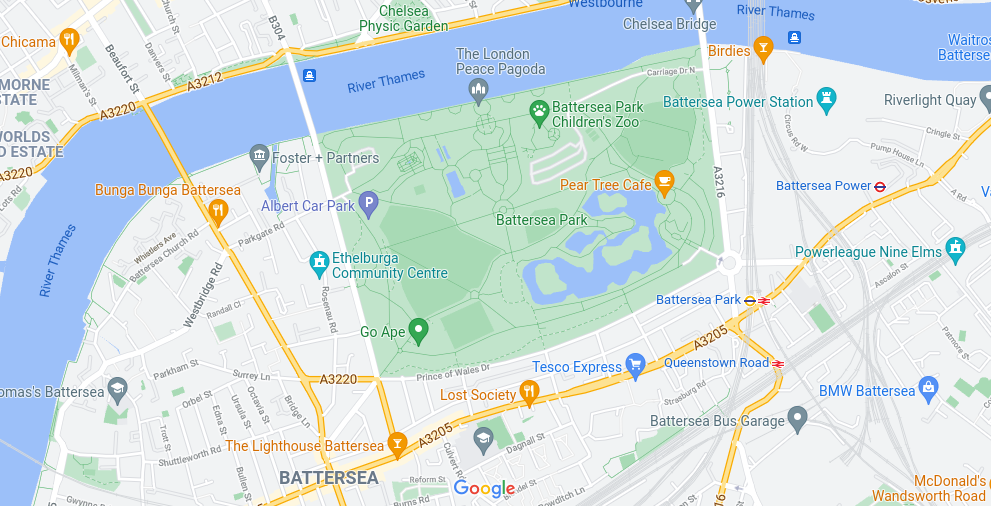 Battersea Park is the perfect location for a traffic-free cycle in central London.

Cycling is welcome, so long as you remain at a gentle speed and don't veer from the cycle path.

Plus, there is a great history of cycling within the park.

Historically the park was run locally, unlike many of the London parks that were under royal jurisdiction - such as Richmond Park, Hyde Park, and Victoria Park.

And so, when the 1895 act to ban cycling in any royal park was decreed, Londoners flocked to Battersea to continue cycling and haven't stopped since! There is a circular route you can follow around the park's circumference, which is roughly 3 km. But, Battersea is a park for general exploration.

You can follow your nose down particular paths on different days, and you're bound to find new points of interest.

If you're on a family bike ride, be sure to make a day of it! Pack up a picnic in your bike pannier.

And, how about a visit to Battersea Park Zoo or hire a pedalo on the boating lake? There are so many fun opportunities. 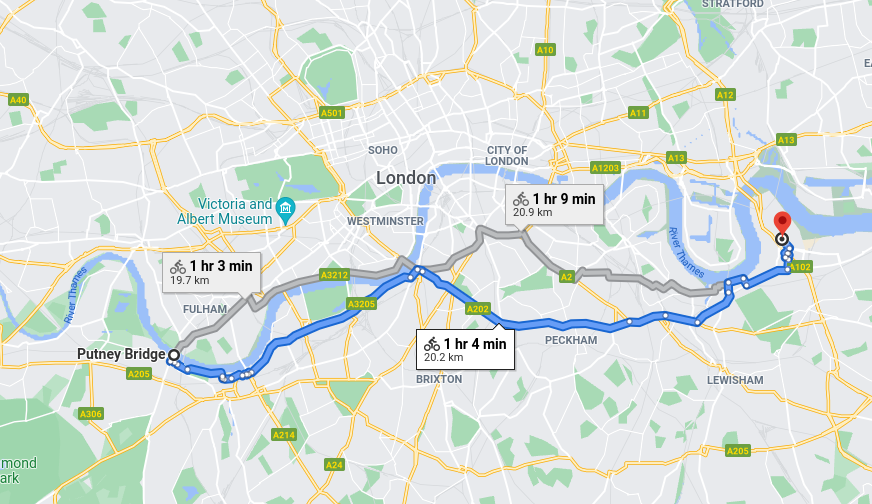 This ride follows the national cycle network route 4, staying close by the Thames throughout.

This means that it's a relatively flat route - making it more of a leisurely pace cycle.

We'd particularly recommend this route for sightseers. The sights are much easier to take in when you're not fighting your way up hills.

And, there are plenty of things to be seen! Acting as your whistle-stop tour of the city by bike, this is the perfect activity for when your friends are in town for a short stay.

As you cycle, you'll pass some of the most iconic London landmarks. The London Eye, Houses of Parliament, and the Globe, to name just a few! 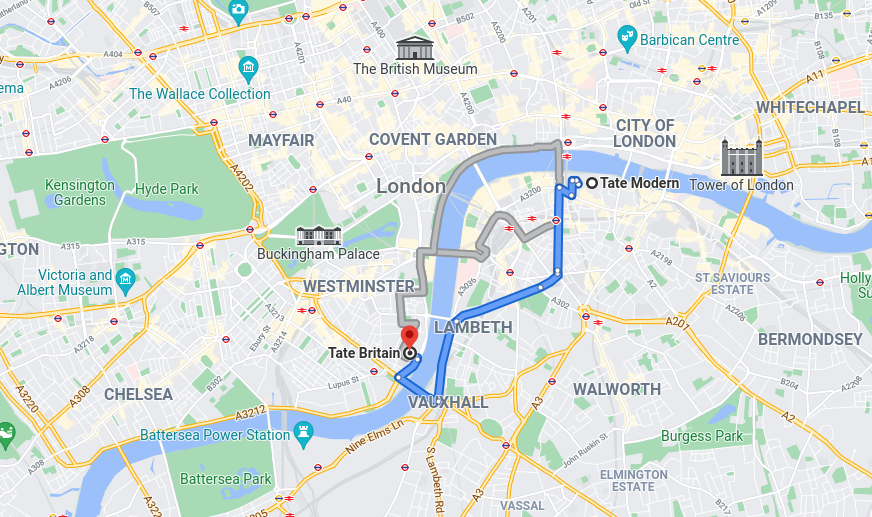 Claiming that this is a list of South London routes and then beginning this ride North of the Thames is unforgivable.

But, we couldn't ignore this great opportunity to recommend a tour of the Tates.

Plus, most of the ride takes place South of the river - so it counts!

Take in some quintessentially London culture by visiting two of the city's most famous galleries and getting some exercise in between. You can travel this route in either direction, depending on whether you're in the mood for the Tate Britain or Tate Modern first.

It's hard to go the wrong way, making it a great ride for newcomers to the city.

So long as you keep one eye on the river at all times and keep a lookout for Vauxhall Bridge, you'll be fine.

If in doubt, check a sign - they're both heavily signposted buildings making your life a lot easier. 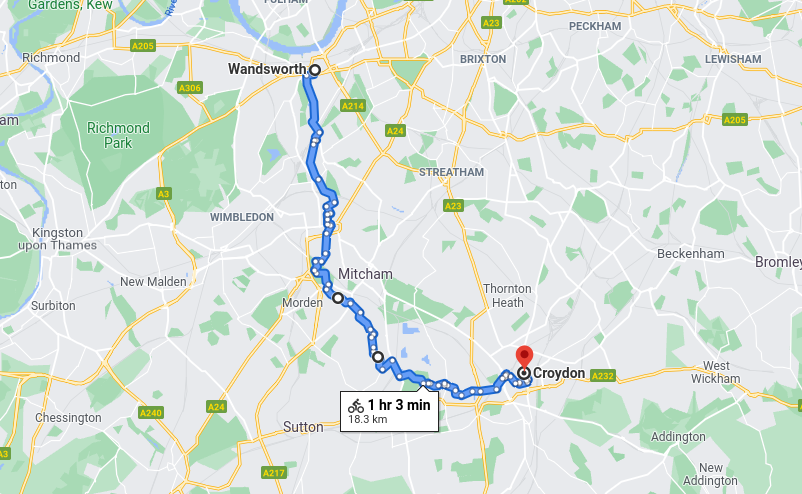 The Wandle Trail follows the Wandle River, a tributary of the Thames, from Wandsworth to East Croydon.

Along the way, you'll travel through parks, wetlands, and other beauty spots - making it a trip worth the time for the stunning views. And, also the contributions of Andrew Sabin who made the route into an art trail.

The great thing about the Wandle Trail is you can hop on and off as you please, as there are many train stations along the way.

Or, when you get to Croydon, get the train back from East Croydon Train Station. Or, if you're feeling ambitious, cycle back to Wandsworth once you reach Croydon. It'll make sure you won't miss any of the natural charms of the trail.

This is yet another ride where you don't need to think about your route, as you can follow the river.

And, if you do get lost, you're bound to find other visitors cycling the trail who will be happy to help.

So, there you have it. Our favourite brilliant bike rides to take around South London.

Some may be a little more south than others, but they all include an undeniable charm.

We can't wait for you to give them a go!

It's time to get ready for your South London adventure. And, the best company on your travels is without a doubt a Bobbin Bike - Shop now!

Not got your fill of cycle routes in London yet? Try reading our blog on our favourite East London bike rides.