East London is quickly becoming the trendiest area in the city. But, it's easy to miss all the sights if you travel everywhere by tube.

That's why taking your bike for a spin can be so appealing!

We're on the hunt for the best cycle routes across London, and the east has some of the greatest paths the city has to offer.

There's so much to see, so planning a route that'll incorporate as much of the area's beauty as possible can be difficult.

Fear not. We've done it for you.

We've narrowed down our six favourite cycle routes in East London - ranging in distance and difficulty - to please bike newbies and experts alike! 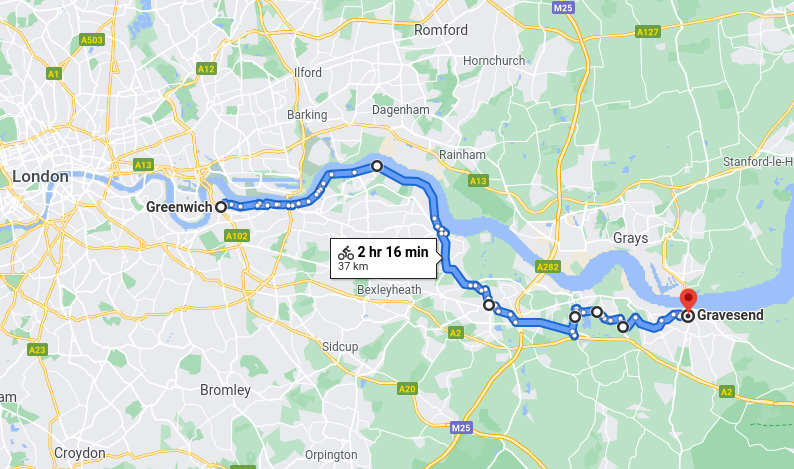 This journey involves following part of the national cycle network route 1, between Greenwich and Gravesend.

Although we have estimated that it will take you 2 hours and 16 minutes, the route follows primarily traffic-free paths - and so can be taken slowly at a leisurely pace to extend the time you're cycling. Begin your cycle at the Cutty Sark, one of the worlds most famous boats now preserved on the banks of the Thames, with views of the towering Canary Wharf as you set off.

Eventually, you'll reach the town of Erith. There, you can veer away from the river into Dartford. From Dartford, it's only a short journey to Gravesend.

While you're there, don't miss the beautiful Sri Guru Nanak Darbar Gurdwara - a Sikh temple beyond the scale imaginable for the modest-sized town. 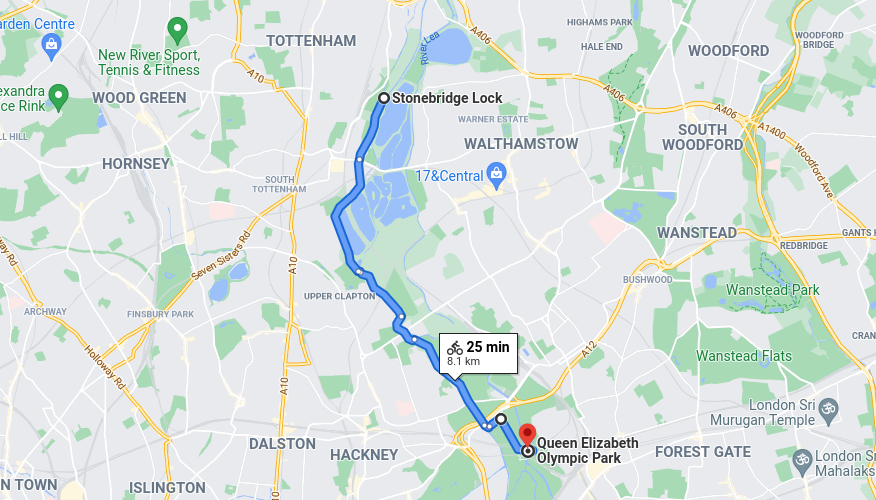 A route that feels far removed from the activities of central London.

This cycle along the banks of the River Lea can give you the benefits of a countryside break without having to leave the city.

From the Tottenham marshes, head south down the river, keeping an eye out for the wildlife that thrives along its banks.

You don't have to depart from the river from the beginning of your journey to your destination, making it a straightforward cycling route to navigate for beginners.

The river heads straight from the hackney marshes into Queen Elizabeth Olympic Park - where there's much to see. Visit the 2012 Olympic Stadium, now the home of West Ham football club. Or explore the wetlands and waterways.

The sights transform throughout the year as different seasonal wildlife emerges, making it worth doing the bike ride again and again for a unique experience each time. 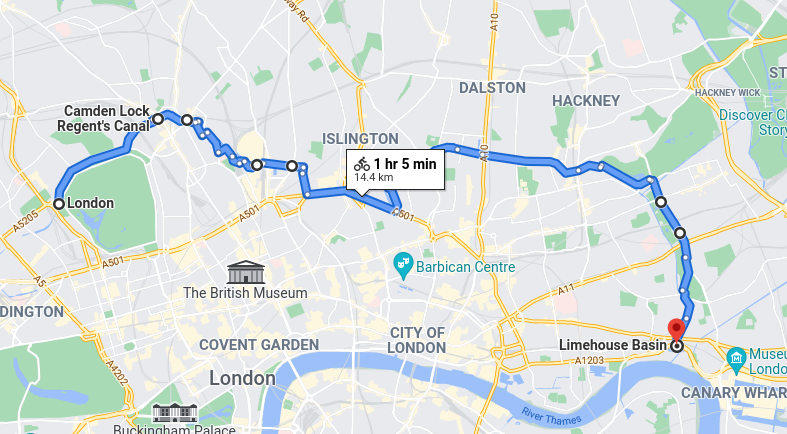 This bike ride may begin in the city centre, but most of its journey is definitively in East London.

You'll pick up the route at Regent's Park, where you can appreciate one of the city's greenest areas through cycling. From there, you'll head to Camden market and onto the regent's canal towpath.

Along the towpath, you'll take in some of London's landmarks while avoiding the congestion of the city roads. You'll pass through Victoria Park, another of the royal parks known for its beauty, as you cycle the towpath.

The towpath and your journey end at Limehouse basin, where the canal meets the River Thames. 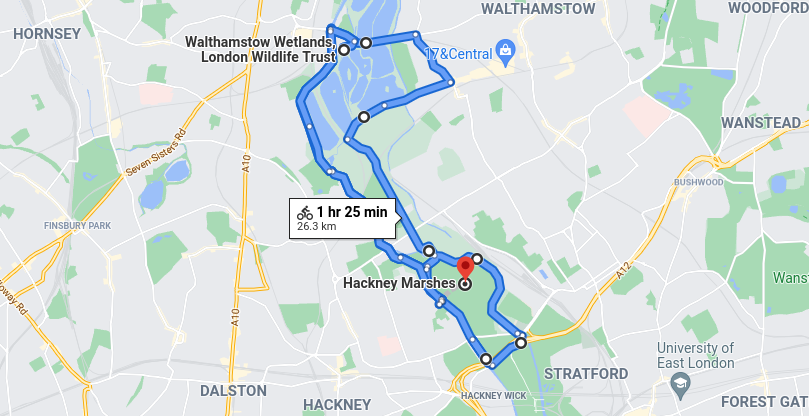 We had to include another ride featuring the River Lea as one of the most underrated gems of East London.

Begin your cycle at the Hackney Marshes Centre, from which you'll join the River Lea. The Wetlands is an urban nature reserve, teeming with a variety of wildlife. The area only opened fully up to the public in 2017, and it shows.

The natural environment is uniquely preserved, making the journey worthwhile.

Throw a picnic in your bike basket and you can spend the day in the Wetlands, keeping a lookout for birds you'd never usually see in Central London.

Once you've soaked up all the beauty, follow the circular route back to the Hackney Marshes. 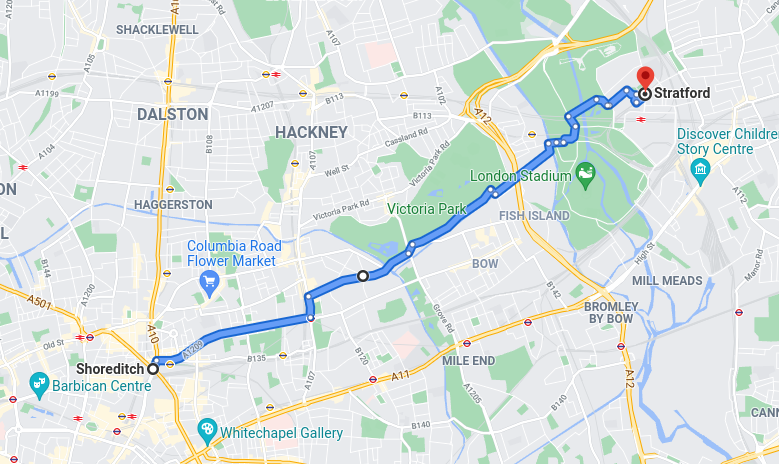 Another short spin that is ideal for your lunch break or to simply stretch your legs - Shoreditch to Stratford hits two of the hubs of East London.

The ride begins in Shoreditch, famous for being a place young creatives congregate.

This reputation has led to many trendy spots, with street art lining the walls providing a feast for your eyes as you cycle through. From Shoreditch, you'll cycle onto Bethnal Green and into Victoria Park.

The park is a great break from the streets, offering different kinds of interest points, this time revolving around natural beauty.

Once you're satisfied with your exploration of the park, cycle on to Stratford centre and explore - the town's your oyster. You could eat at one of the many beloved restaurants. Or go shopping in Westfield?

Perhaps, if you're feeling brave, take on the ArcelorMittal Orbit slide - the worlds tallest and longest tunnel slide. 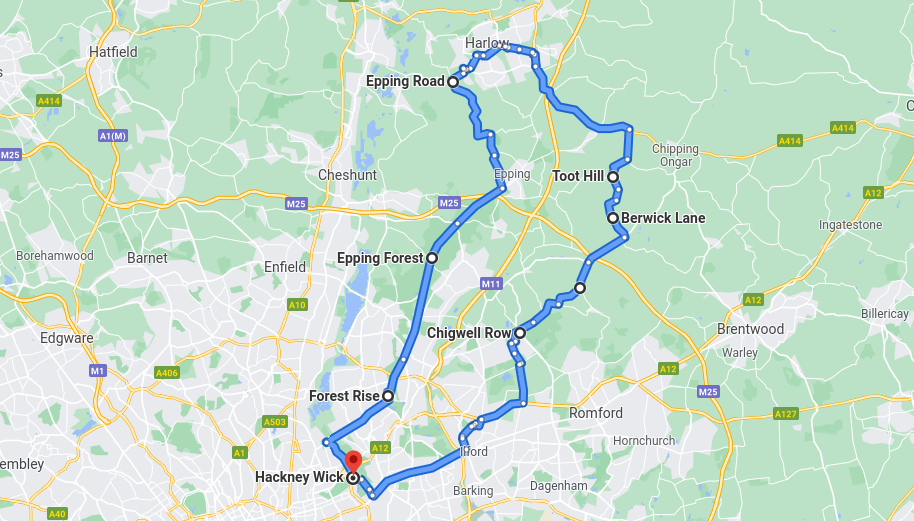 We've saved this mighty ride for last, as it covers some serious East London ground.

But, to see so much of the area, you're in for a tricky ride.

Particular points of difficulty include the hills in Epping Forest, so only embark on this route if you're up for a challenge. If you do decide to follow this route, you're in for a treat!

It begins at Hackney Wick Station, first heading towards Walthamstow and continuing onto Epping Forest. Within the forest, there are countless detours that you can take to explore and extend your ride. Or, you can cycle straight through, exiting to Theydon Garnon.

From there, head North to Greensted before you begin the returning leg. In Greensted, be sure to see the church. It is the oldest wooden church in the world, with a nave thought to have been built between 998 and 1063 AD.

Then head back to Hackney Wick Station along country lanes and quiet roads, soaking in the landscape before returning to urban London.

You don't have to look far to discover some of the city's best cycle routes.

By selecting our six favourite bike rides in East London, we hope we've made it even easier for you to find one you love.

Ready to take on East London's best cycle routes? Try them with a Bobbin Bike!

Or, have a look at our favourite West London routes if you fancy a further afield spin.