From iconic sporting venues to beautiful green spaces, North London has it all.

And, what better way to see as much of it  as possible than on your bike?

But, there are almost too many twists and turns in a city so large that you could take. Finding a solid route by yourself is a considerable challenge.

As part of our Ultimate Guide to London Cycle Routes, we're taking on the north of the capital. Our aim - to help you find your new favourite route.

So, you're sure to find one you love! 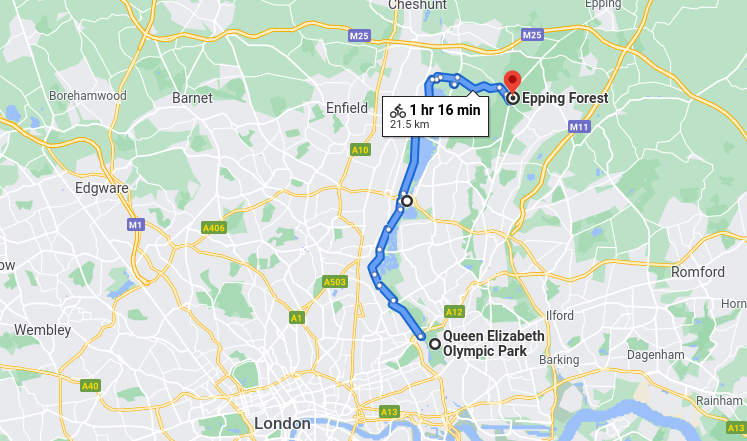 Temporarily escape the city skyscrapers in favour of the canal locks along the River Lea.

Begin your journey with views of the sporting complex that hosted the 2012 Olympic games, surrounded by an area that has since committed to stunning landscapes and greenery.

The route follows the canals northwards, past reservoirs, towpaths, and small parks until you reach Epping forest. Once you reach Epping Forest, you can extend your cycle as much or little as you'd like.

With 284 km of shared-use paths, there are endless options for exploration.

While there, make sure to keep an eye out for Queen Elizabeth's Hunting Lodge. It's a Grade II listed building.

Admission is free and well worth your time. In the lodge, you'll have the opportunity to discover what a Tudor kitchen was really like. And, if you're lucky, be able to dress up in Tudor garments (not compulsory - but a lot of fun)!

However, our favourite reason to venture there is the panoramic views of the forest.

Your cycling efforts will be worthwhile as soon as you are greeted by the scenery from the top floor of the Lodge.

Take in the expansive sights, and we're sure you'll want to do this ride all over again the next week!

And, if the idea of cycling around the Olympic Park excites you, have a read of our East London Cycle Guide to discover more cycles in the surrounding area. 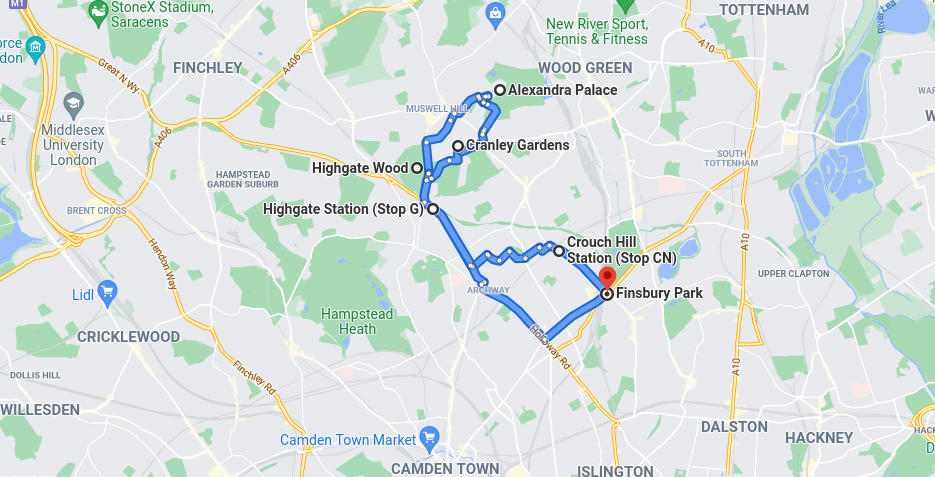 The route between Finsbury Park and Alexandra Palace is innovative in its use of an abandoned railway track.

The railway was built in 1860 and is almost entirely intact today.

While on this route, you only have to re-enter the busy city on your bike briefly (between Highgate Woods and Cranley Gardens) before returning to the peace of the path.

Otherwise, the route acts as an escape within central London. Following the disused tracks between the past train stations to avoid the traffic. The path is flat because of its previous purpose, and so has become a favourite of cyclists, walkers, and joggers alike.

Plus, you can use your cycle as an opportunity to see Alexandra Palace.

Like the Hunting Lodge, it's a Grade II listed building. Grand in stature, it's a view you shouldn't miss when visiting London.

And, if you're cycling with kids, the palace's park has the potential to keep them entertained all day. If they're not tired out from the gentle cycle to the beautiful park, you might consider letting them run riot in the Little Dinosaurs soft play.

Or, if you're feeling particularly adventurous, have a try of the GoApe zipline course!

Or, if you're after a slower pace? Check out the garden centre or Sunday farmers market to get the most out of your day trip.

Whenever you've soaked up all the sights of Ally Pally, turn around and cycle back to Finsbury Park.

Make sure to keep your eye out for the little details that make the route.

Like the remaining platform at Crouch Hill Station or the Spriggan sculpture that has an exciting history of its own. 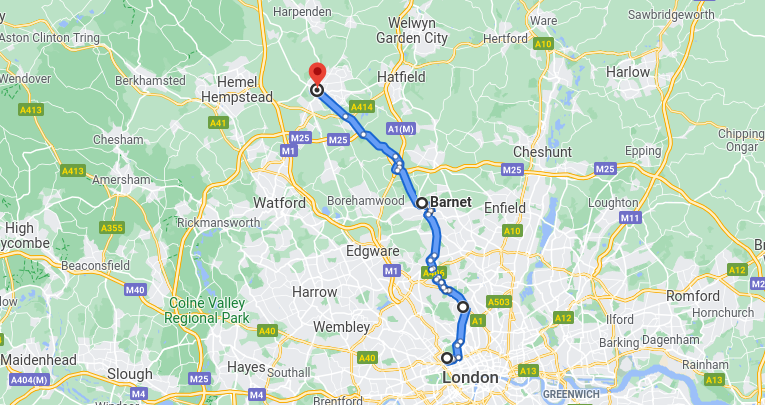 We wouldn't recommend this ride for complete beginners because of the challenging hills that you face when leaving London.

But, if you're an experienced cyclist, follow this route for a taste of the countryside, without venturing too far from home.

There's a reason Regent's Park is known as 'the Jewel in the Crown'.

You might worry that beginning your cycle somewhere so lush will make the rest of the ride anti-climatic.

But if your push past a few tough hills, you'll soon be proven wrong. This route takes you through the quaint residential area of Highgate. You can stop at one of Highgate's gorgeous tea rooms.

Or, visit the graves of George Eliot and Karl Marx, who are both buried in the Highgate Cemetary.

From there, you'll travel through Barnet and towards St Alban's.

As you reach the city's borders, you'll be welcomed by a tunnel of tree's along an abandoned railway line. We promise, we're not obsessed with train tracks - they just make great cycle paths.

Once you're in St Alban's, be sure to visit the stunning Cathedral

And, don't forget to fuel up for your cycle home! For that, we recommend The Waffle House - located in a working 16th-century watermill overlooking the river Ver.

While the North London Escape is a  relatively flat route, we consider it a bit challenging because of its mammoth length.

If you want some company or don't trust yourself to take the right turns, cycle with the HSBC British Cycling Group that popularised the route. Beginning at Alexandra Palace, you quickly 'escape' to the quiet roads that give the route its name.

Familiarise yourself with the stunning suburbs, luscious green areas, and quiet lanes.

It can be a necessary countryside recharge that feels so separate from the busy roads of central London. 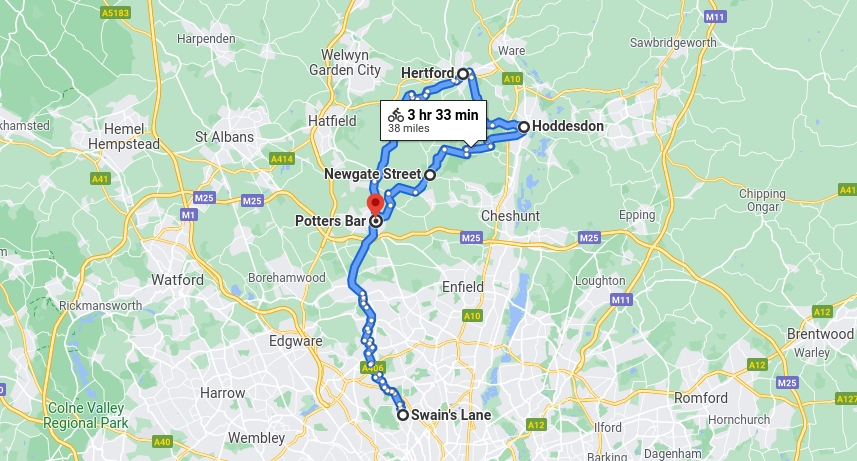 If you're from North London, you'll probably see the start point of this route and understand why it's difficult.

Swain's lane was formerly known as Swines Lane because of the farmers that herded their pigs along the road.

It's also incredibly hilly - really, photos don't do it justice. Despite the lane being on the shorter side, you wouldn't realise by how long it can take you to travel it. It's covered in hills, making it a challenging place to begin your bike ride.

But, if you fancy a great thigh workout, we couldn't think of a better location!

From Swain's Lane, head to Potters Bar. Cycle through sweet towns and villages, passing by the idyllic Broxbourne Woods until you reach Hodderson. Then, travel to Herford, where you make the difficult decision.

To stop for a drink in one of the quaint pubs and get the train back into London. Or, if you fancy a challenge, cycle back to Potters Bar and make it a circular route.

Either way, you've completed a testing and brilliant bike ride! 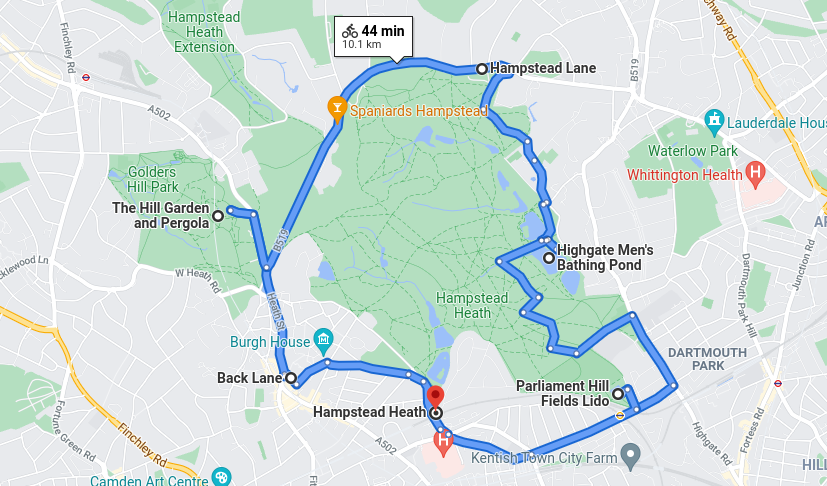 Another great park to take a spin around. Removed from the traffic of roads, the heath is a great location for a family bike ride.

Just remember to to read the guidelines before you set off, as not all paths are cycle paths - those that are, are shared with pedestrians. Plus, there are speed limits for bikes.

This route begins at the station outside of the heath and follows a circular route, hitting all the must-see spots around the green space.

The first landmarks are Back Lane, The Hill Garden and Pergola. Fair warning, there are some hills to tackle at the start of this route.

If heading to the Pergola, go down Inverforth Close and keep to the left.

What was once the garden of a manor house has become a free public space with gorgeous views of West Heath.

From there, follow the outskirts of Hampstead Heath downhill and back up until you can enter it at Hampstead lane. You can then explore the grounds. Turn left to re-enter the heath and follow the designated cycle paths through the heath to Highgate Bathing Pond, a favourite spot for open-water swimmers.

We'd recommend a dip in the summer, and if you're feeling brave, you can get your heart pumping in the water in winter.

Then, passing the lido, you'll exit the Heath briefly and re-enter at Parliament Hill fields. Head back to the station. Along the way, you'll travel through meadows, up hills, and past many trees. (There is another detour up the hill which you can miss out if your legs are tired and you're not fussed about the view!).

There's a reason a trip to the heath is so popular. It's a beautiful bike ride, right in the heart of North London.

There are a vast amount of great rides for a range of skill levels in North London.

Riding your vintage bike is a chance to take in the greenery, architecture, and canals that make the area what it is.

It was tough work, but we managed to narrow it down to these five routes:

Ready to discover the beautiful views of North London? What better way than on your Bobbin Bike!

And, if you've not already got your fix of cycle routes, read our top picks for bike rides south of the river.