Below, we'll trace through cycling history to find how we got to the present day. We'll take in some of the industry's most revered cultural icons, and find out why bloomers with a pulley system aren't always a grand idea.

In the early 19th century, bicycles were mainly restricted to male use. The frame style of the day was the Penny Farthing, or "High Wheeler". This was far from comfortable or practical, given the attire on offer. It wasn't a dress-friendly bike at a time when dresses were the main, and often the only option for women.

Despite there being no female-centric bicycle brands, there were a few trailblazers who subverted the cultural direction. Amelia Bloomer became a cycling figurehead owing to her wearing of trousers of the same name. Whilst skirts were the norm, she often travelled on 2 wheels in trousers, much to the general public's chagrin.

Following in Amelia's footsteps - or tyre tracks - we have Jeanie Welford. The first woman to join Cycling UK, her time brought about a slight change in cycling attire. We started to see more practical elements added to the double-wheeled wardrobe. Think slim pleated dresses with long under skirts, and hardy tweed jackets over formal blouses.

As women's influence in the workplace increased, we can see the clash of the traditional dresses and blouses being protected by the new age dress, cut in harder, longer fabrics. The trend isn't dissimilar to, and was even borrowed in part by, the scooter boys of the 1960s - using old military parkas to cover their mohair suits whilst riding around the city.

The biggest cycling boom of the pre-1900s has to be the infamous "Cycling Craze" of the late 19th century. Differing frame styles started to appear, with the tricycle becoming the forerunner for the upper-class woman. With three wheels and a lower centre of gravity, this was the first time we saw fashion fit the function of a two or three-wheeled companion.

This allowed trendsetters like Annie Londonderry to bring cycling out from the shadows as an upper-class hobby, and into the world at large. As the first woman to cycle around the world (taking a mere 15 months), it's certainly a point of interest that Londonderry didn't conform to men's cycling style. Rather, she preferred to adapt her own clothing to suit her needs.

This signalled the dawn of the "rational dress". As women's freedom and role in society grew, the concept of seeing women cycling in the clothes that they were comfortable in became prevalent. Weighted pulley systems were popularised in skirts, along with back zips and trousers.

At the advent of the 20th century, two world wars helped push the envelope for both women's societal status, and their cycling attire.

A number of previously unavailable job roles now opened up to women, with husbands, fathers, and sons conscripted for the war. The prominence of cycling suddenly became twofold as life on two wheels became accessible in both work and leisure.

Still, the restraints on the cycling gear available remained. The importance of this phase, whilst not in the development of clothing, rested more with the change in societal acceptance and visibility of women in cycling. In addition to this, racing bikes began to be popularised with stalwarts such as the Raleigh chopper coming to the fore.

Come the 1950s, we see possibly the biggest change in attire: the introduction of lycra. Across both genders, we got a fresh hit of new gear: cycling jackets, cycling shorts, and cycling jerseys. What's more, as the size ranges expanded, the comfort levels increased. Despite men still cycling more, women who did cycle were suddenly able to enjoy leisure rides of longer distances.

Unfortunately, the gender gap remained in part. It took a surprisingly long period for Lycra to catch up with the differing needs of each gender. Padded shorts needed to differ in design massively for each, and it wasn't until the 1980s and 1990's we started to see this happen. 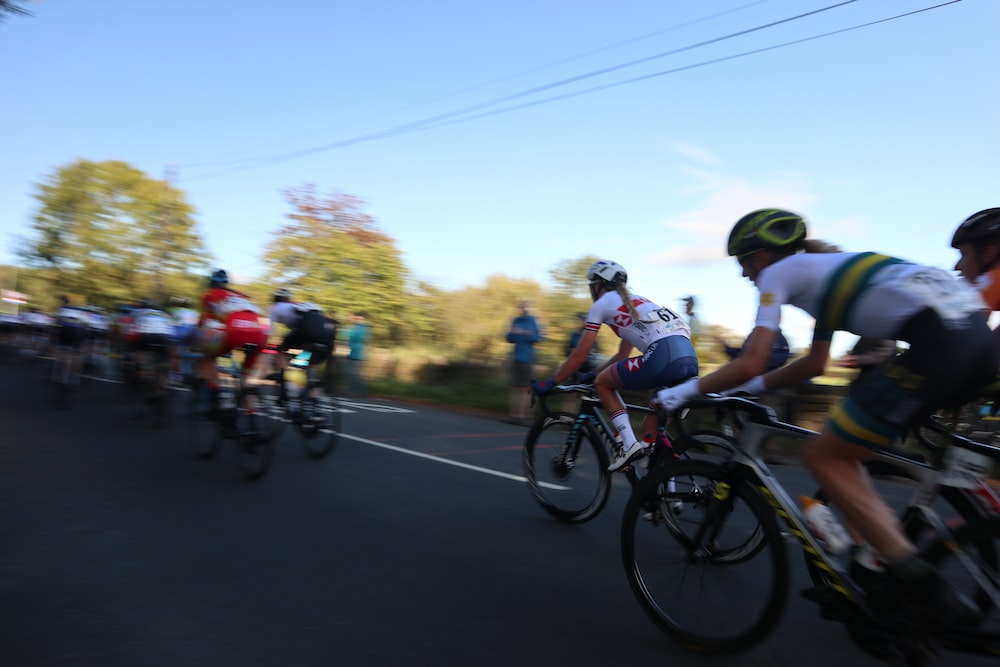 Amsterdam and the Loop Frame

A discussion on the history of cycling wouldn't be complete without mentioning the tour de force that is the Dutch style, loop frame bike. Not dissimilar to a pared-down version of the penny-farthing frame, this style comprises swept-back handlebars, a "step-through" frame designed specifically for skirt wearers, and large wheel size to give an elegant cruising feel to the whole affair.

Popularised across the Netherlands where cycling reigns supreme, this advancement finally felt like something built purely to champion the female cyclist. The frame shape allowed for wearing a dress in the Summer, with handy elements like chain cases introduced to stop fabric snagging in the mechanics. Further characterised by wider sprung saddles (super comfy), the loop frame bike boasted all the gearing and nuts and bolts of "men's" bikes - only comfier. And cooler.

Perhaps the latest cultural shift we are witness to is the change in the purpose of the humble bike ride. As the battle for equality continues across the industry, the actions taken by those who've come before us have paved the way for change.

We're becoming more environmentally aware as a people, and this has led to a change in our commuting style. Cycling is more affordable, dramatically lower emissions, and cooler than public transport. And following in the footsteps of cycling capitals such as Amsterdam, more and more public cycle lanes are popping up left, right, and centre. This is aiding accessibility and safety in the industry, ensuring safe cycling routes are available for all.

Visibility on elite women's cycling is also increasing. Over the last decade, we've witnessed the appearance of the Tour de France Femmes, Giro d'Italia Femminile, and the Paris-Roubaix Femmes. Whilst previous iterations of these events haven't lived past a couple of years, the current versions are aimed at creating sustainable events.

Designed to attract and inspire young cyclists, the Tour de France Femmes and Paris-Roubaix Femmes in particular boast full television coverage and a large sponsor in Zwift, hopefully accelerating the size and popularity of the event.

Whilst we'll always encourage cycling through a field with a picnic basket or dog in tow, it's fascinating and important to see how the bicycle has interacted with the timeline of feminism, and the clothes that have come with it.

It's become symbolic of individuality, self-expression, and perhaps most importantly of all, freedom.